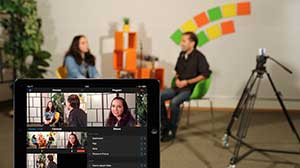 After posting my article on creating multi-cam music lesson videos using Wirecast Studio, one of the Mastermind members alerted me to a cool iPad/iPhone app that looks to do something very similar called RecoLive. RecoLive lets you connect up to 4 iPad and/or iPhone cameras and switch between them live with a master tablet or phone.If you happen to be an Apple junkie (like me) with some extra iPads and older iPhones laying around collecting dust, this could be a great way to get a multi-cam studio setup with very little added expense. The app itself costs only $4.99, and if all your iOS devices share the same app store user account, you can install multiple copies without paying more than once for the app.

Here’s a video demonstrating the app:

I had a few questions about using RecoLive for creating music lesson videos:

The answer to the first question is basically: no. But there is another option (which I haven’t tested yet) – you can use a free experimental version of a desktop program called RecoLive Capture where all the iPad/iPhone videos can be mixed with screenshots from the desktop computer itself. Keep in mind that if you’re planning to use an iPad app to show and annotate digital sheet music, you’ll still need to use a separate iPad streaming program like Reflector 2 – I’ll be testing this out and reporting the results here shortly.

As for the storage memory, it turns out that each iOS device will need to have enough room to store its own version of the video. Once the video is shot, the master iOS device will copy the videos from the satellite devices and create the final version integrating all the angles and transitions determined from the master controller. So much for leaving Angry Birds on my iPad 3…

I’ll be putting together a full review video as soon as possible. The app is very intriguing – if it works as I hope, it could be a great solution for teaching multi-cam music lessons on the go, as it would be much easier to pack 3 iPads and an iPhone than the equivalent in full-size video camera equipment.

There are some limitations that I can see right away, though. First, you can’t stream the videos live – for that you would need to use a different app called Switcher Studio, made by the same people that developed RecoLive. The wrinkle with Switcher Studio is that you would need to shell out for a rather pricey monthly or yearly subscription plan to use the app, and it only streams live in YouTube and Facebook apparently. If you wanted to use a multi-cam setup for Skype lessons, then you’d be better off using Wirecast Studio, where you only pay once for the program and get to keep it and use it as long as you’d like.

The other limitation is the audio quality. While the iOS video cameras are great, I wouldn’t want to depend on their microphones for high quality music instruction. My thinking is that I would use the iOS multi-cam video footage and record the audio separately using high quality microphones connected to my Zoom H4N portable digital audio recorder. I would then work with a desktop video editor like Adobe Premiere to synchronize the iOS video/audio with the Zoom H4N audio, strip out the iOS audio track, then render a final version for publication.

Stay tuned for a full video review of RecoLive soon!

This is such great info Hugh! I’m going to dust off my old iPads and give it a whirl too. One thing- I read that this app could capture screenshots also from a laptop. In that case, could the digital music score be taken from there during a live shoot or wound the reflector app still be necessary. Thanks for this great article.

I’m so glad you found this helpful, Margaret! I’m going to be posting a video demonstrating RecoLive together with their experimental desktop companion app. Yes, you can just show what’s on your computer screen into the multi-cam view, so if you have a PDF of your sheet music, that would work just as well. Since I’m using my iPad as a sheet music reader and annotator, it makes sense to use Reflector 2 to stream that view into my desktop, but that’s optional.